This webinar took place on 17 March 2022.
A recording is available here: https://www.youtube.com/watch?v=jc3GOPnwIUE
This week we will publish a series of blogs with selected, edited content from each of the speakers.

Alexandre was born in Russia, but spent most of his early life in Ukraine, graduating in medicine from the Medical University of Kyiv. He is Senior Advisor for the European Centre for Social Welfare Policy and Research (Vienna, Austria), Member of the Board, HelpAge International and Former Head, United Nations Programme on Ageing.

Alexandre presented a demographic analysis, noting that the population of Ukraine has a higher share of older people for is the case for any of the other 15 ex-Soviet states. Since the 1950s the country has been a pioneer of gerontological research.

Since February 24 no data on COVID-19 have been available or published on sites such as the John Hopkins Tracker.

Alexandre focuses on one recent event: the evacuation of the inhabitants of Irpin, about 20 kilometres from Kyiv, which took place a few days before the webinar. He shared images of the city before and after the Russian bombardment, of people sheltering from the attack and fleeing from the conflict zone. The image below was taken in Irpin and shows the weather conditions and challenges faced by older people with impaired mobility. Several people were killed while fleeing. And, unlike the woman in this picture, many older people did not have anyone who could help them leave. 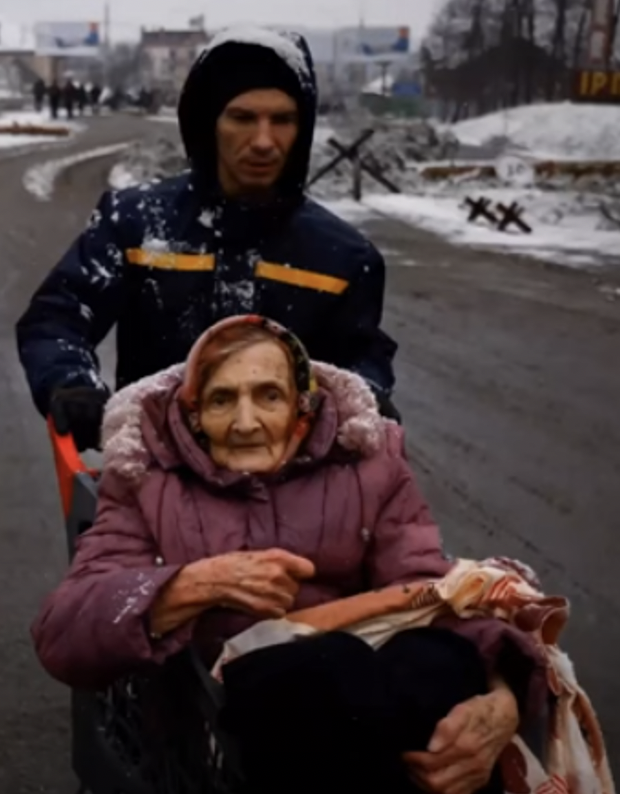 Alexandre observes that this is just one of many humanitarian catastrophes brought about by the Russia invasion, adding: “There is no conclusion in this story.” He calls on the UK and other western democracies to come to Ukraine’s aid.