India’s COVID-19 vaccination coverage has crossed 1040 million doses as of 27th October 2021 [link]. Only 30% of these are second doses. The vaccination was carried out by 94,323 health facilities that mainly were public-funded (97%). While India’s absolute number of vaccines is impressive, they are yet to reach out to 34% of the adult population eligible to receive the vaccines.

The Government of India has designed an ambitious target of producing more than 2 billion doses of vaccine by the end of 2021, as India needs more than 1800 million doses to administer the vaccine to all the eligible population [link]. India also approved importing of vaccines made outside India following the second wave. Given the vaccine shortages during the first wave and second wave of the pandemic, it becomes crucial for countries to prioritise vaccination to vulnerable people, including the older population. India, however, did not prioritise older people the way high-income countries have prioritised. The timeline below illustrates the vaccine rollout strategy of India. On 16th January 2021, India prioritised Health Care Workers and Frontline workers to get either Covisheild (Indian version of AstraZeneca produced by the Serum Institute of India locally) or Covaxin (designed and manufactured by Indian company Bharat Biotech). Vaccination for the public started on 1st March, and the government announced that only older adults aged 60 and above and middle-aged adults 45 and above with non-communicale diseases (NCDs) were eligible to take the vaccine. While this strategy didn’t completely prioritise older adults, it allowed older adults to visit the public health facilities without competing with the adult population aged 18 and above. During this period, we need to note that there was vaccine hesitancy among the public worldwide due to the fear of clots that could arise from taking the AstraZeneca vaccine. In addition, some members of the public feared taking India’s homegrown vaccine that was still undertaking the third phase of a clinical trial [link]. After partially prioritising older people, India opened its vaccination intake for all adults aged 45 and above. Soon after a month, the vaccines were open to all adults aged 18 and above.

Figure 1: Timeline and the strategy of Indian vaccination rollout

Table 1 provides vaccination coverage in India since the inception of the COVID vaccination programme in January 2021. Out of 139 million projected number of older people aged 60 and above, 78% received their first dose. However, only 47% of them received a second dose. As one in 2 older adults aged 60 and above are not fully vaccinated, their risk for disease, morbidity and mortality continues to be higher given the higher vulnerabilities in later life. As seen in Figure 2, vaccination uptake of older people was higher when they were prioritised along with adults 45 and above with NCDs.  Soon after the vaccines were open to everyone aged 45 and above with or without NCDs, there was a dip in the vaccination update among older adults. A further significant drop was observed from May 2021 onwards when older people no longer had any prioritisation. Almost all Indian states except Kerala (Figure 3) has experienced this decline in vaccine uptake among older people once the short span of prioritisation was removed. After experiencing a few dips, Kerala ensured the momentum of vaccination of older people by introducing several supporting mechanisms while following the central government’s strategy of not-prioritising older people. For instance, the state of Kerala released guidelines to prioritise older people and people with disabilities when they visit a health facility for vaccination. Health workers visited older people with health conditions and mobility disabilities to provide vaccines at their homes. Also, rapid antigen test was replaced with RT-PCR test and [link]  [link]  [link] asked care homes to carry out once in 3 months RT-PCR tests to all the residents. All these initiatives ensured that the Kerala vaccine update was better among older people than the national uptake.

Table 1:  Vaccination coverage in India between 16th January and by 27th October 2021 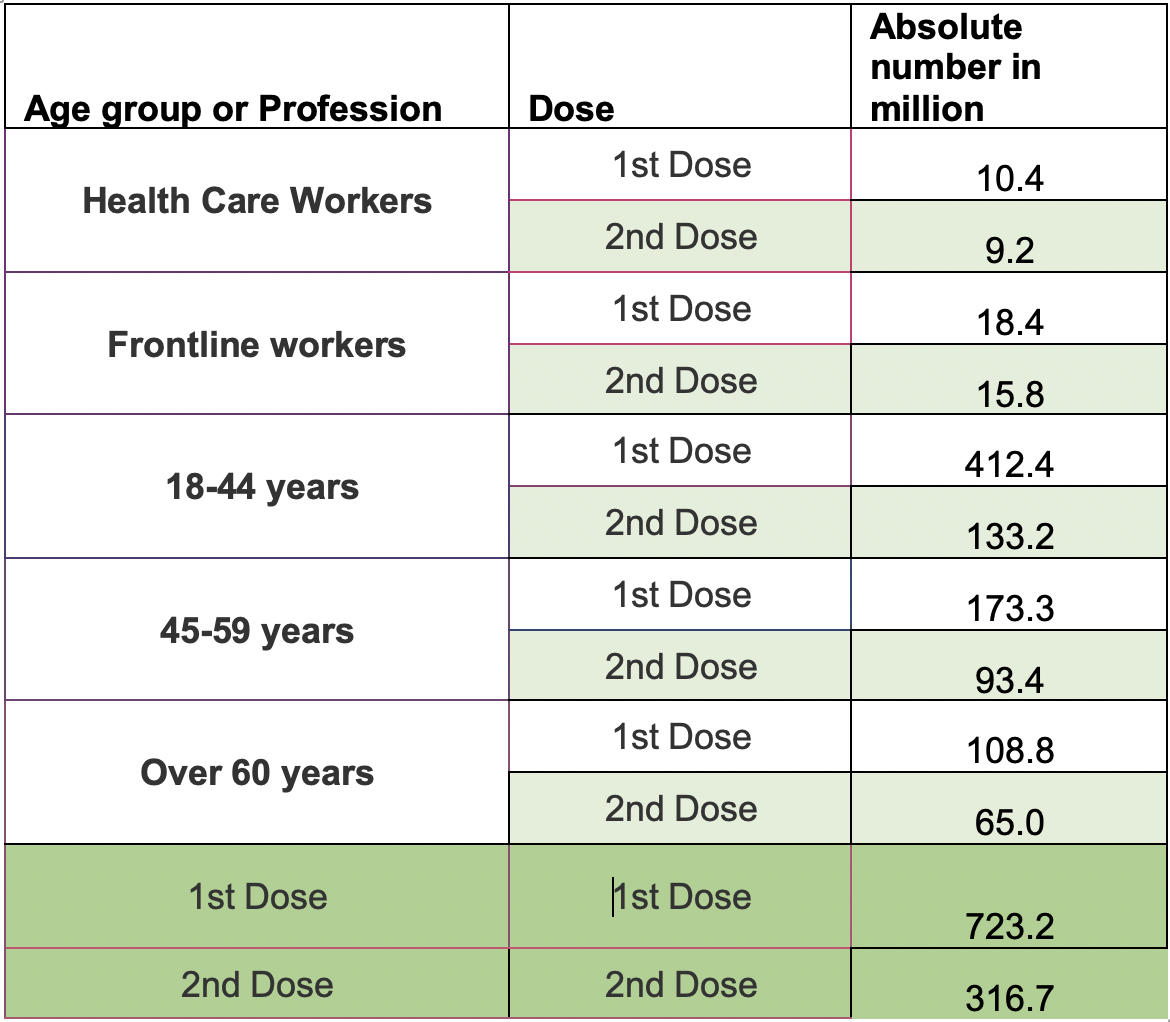 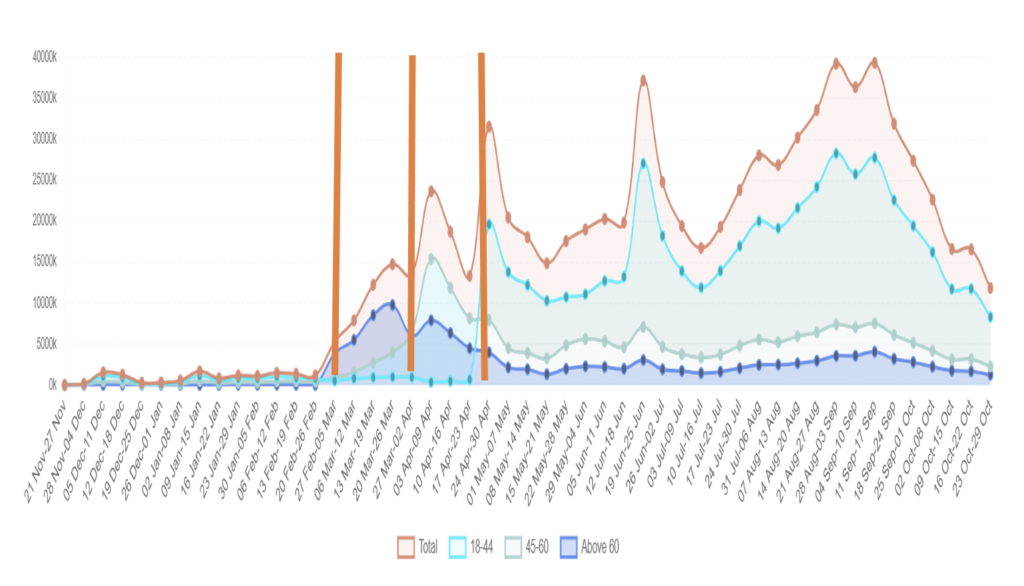 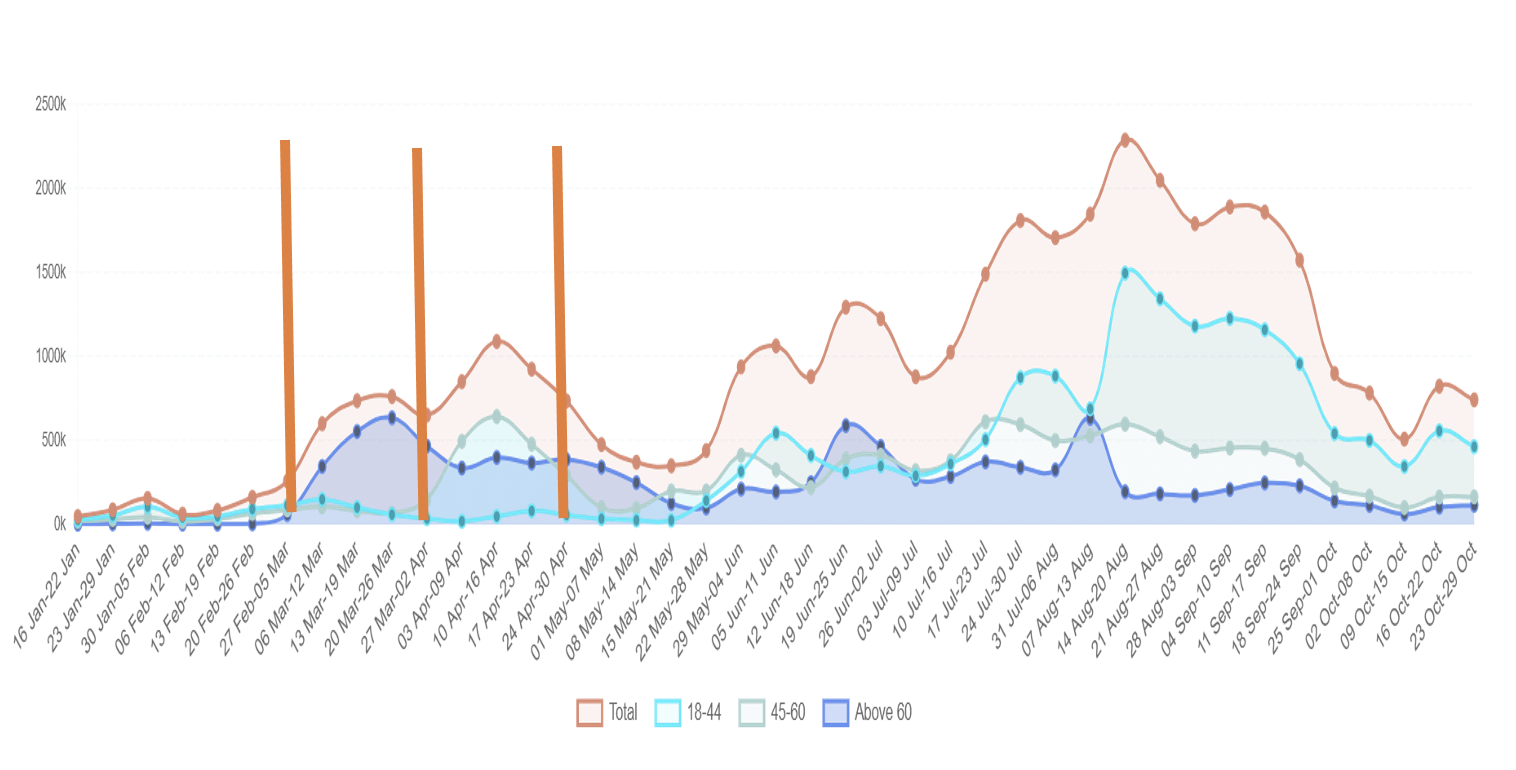 India’s reported COVID deaths during the two waves of the pandemic are nearing half a million in November 2021. Figure 4 illustrates the daily deaths and Reproduction rate (R0) that signifies the contagiousness of COVID virus (OWID, 2021 [link]) until 28th October. Several Indian and global scholars have argued that the Indian mortality data is underreported. There are multiple estimates on the level of underreporting. The lack of coherence between the contagiousness and mortality in the Figure 4 also raises concerns on the data quality.

Figure 4: Deaths per million and reproduction rate in India from the start of the pandemic to end of October 2021