Appeals to use masks and minimise activities outside the home as part of the COVID-19 transmission prevention protocol are not new to the people of Jambi city. The city, split by the Batanghari river, is the capital of Jambi province on the island of Sumatra, Indonesia. It has a history of being shrouded in smog due to nearby forest and field fires, which have been occurring with increasing frequency since 1997. 2019 was one of the worst years, with disastrous forest fires affecting Jambi twice. Dangerous levels of air pollution due to exposure to smoke from the forest fires cause Jambi’s inhabitants to experience breathing problems and stinging eyes. Usually when the smog thickens, the local government issues an appeal for residents to reduce their activities outside the home and to use masks if they have to venture out. This is to minimise respiratory tract disease, especially in children and elderly people.

The banners read: Fight COVID (or the ‘enemy COVID’)

Does this familiarity with appeals to wear a mask make it easier to comply, now that the COVID-19 pandemic has hit Jambi? After the first positive case of COVID-19 was announced by the Indonesian government, the city of Jambi experienced a hike in the price of masks, especially medical masks. Activities outside the house reduced drastically. Just like when the smog from fire thickens, people chose to stay indoors, and many people used a mask if they had to pursue activities outside. But since the Eid al-Fitr celebrations – approximately three months into the pandemic – for various reasons most people have returned to their normal activities outside the home. Masks are still seen a lot, although it cannot be denied that the number who do not wear a mask is also not small, including among the older population.

Not many elderly people are seen in public spaces since the pandemic hit Jambi city. Those who are in evidence are for the most part pursuing economic needs – they are working. One of them, let’s call him Mr Agus, is an older man originally from Java. He works as a parking assistant for a bakery, and he strictly obeys the rules about wearing a mask. His job of giving cues to customers exiting the car park onto a busy road relies entirely on his hand and voice signals. Even though he admits that the mask sometimes makes his voice inaudible, this is not a reason for him to take it off. The bakery where this nearly 70-year-old man works applies the health protocols as determined by the city government. But Mr Agus explains that he used them even before Jambi implemented regulations and sanctions related to wearing masks outside the home. “I trust the government and follow their recommendations”, he says. The combination of personal awareness and diligence of the bakery lead the old man to follow the precautionary rules with greater discipline.

It’s the same with another older man, let’s call him Mr Saleh. He’s a 60-year old who works daily as a scavenger. He, too, obediently keeps wearing a mask while pedalling and occasionally pushing his bicycle which is loaded with the results of his scavenging. Juggling with rubbish has made him quite accustomed to wearing a mask. The pandemic merely makes him more reliable in its use. He says that when the smog engulfed the city, he also always wore a mask. He cites a proverb – which plays on the similarity of the Indonesian words ‘can’ [bisa] and ‘normal’ [biasa] – to capture the sense that by doing something regularly, repeatedly, it becomes something that is easily done. Mr Saleh does not find it difficult to wear a mask in his daily activities because he has been used to it since before the pandemic. 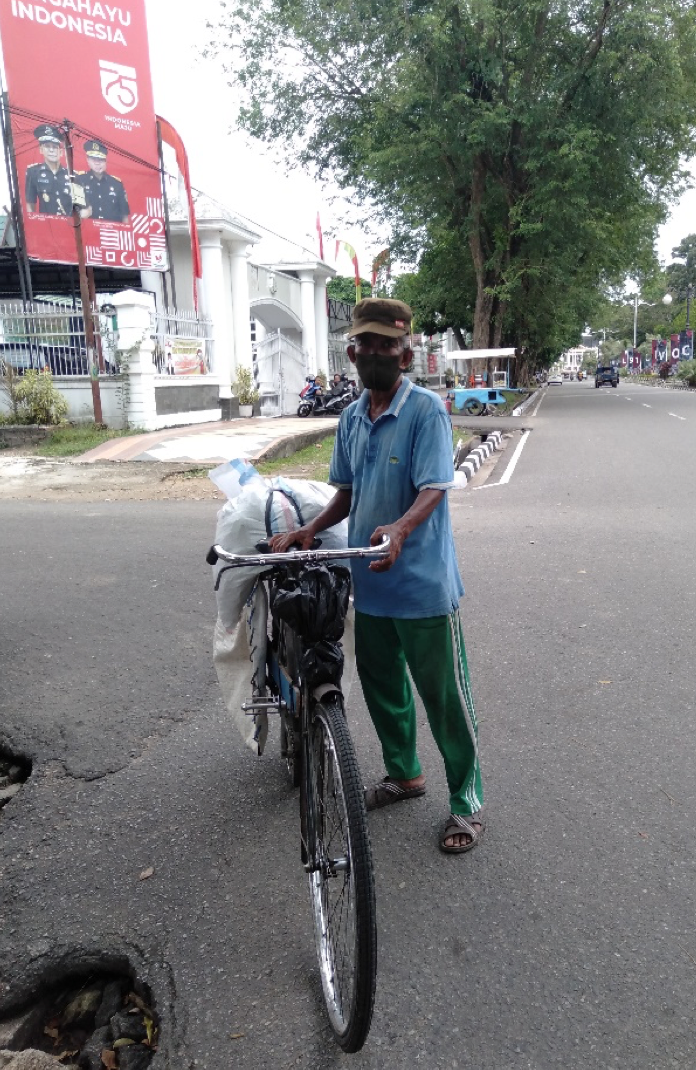 The habit of wearing a mask is also strictly enforced by Mrs Siti, an elderly woman who works as a massage therapist in Jambi. Even though her work is not done outside the home, Mrs Siti never takes off her mask when working. Previously, for almost 3 months, Mrs Siti did not accept customers at all. Eventually the pressure of economic needs made her return to working. According to Mrs Siti, the COVID-19 pandemic has a bigger impact on her life than the regular haze and smog season. Even though she also experienced a decrease in the number of customers during the haze, there were still some who came, and she also had no worries about accepting customers. Returning to work, Mrs Siti has made her own rules to protect her health. Apart from the strict use of masks, she immediately washes her hands after finishing a massage. She is unwilling to accept customers who have just returned to Jambi from out of town or customers who complain of cough and shortness of breath. She is worried about the transmission of Covid-19, especially due to her advanced age. “I am old, according to the TV, I’ll more easily get infected.”

Of course, there are still older people who are not used to wearing a mask properly or are even reluctant to use one at all. One such older man, aged about 65, sells children’s balloons every day. He can be seen opening one of his mask straps so that it no longer covers his nose and mouth properly. It is not easy for this elder, let’s call him Mr Hamid, to keep his mouth and nose tightly covered while pedalling his bike. Maintaining balance of his bike and the load of balloons already makes his breathing difficult. All the more so, when his nose and mouth have to be covered by a mask. “But when I arrive at the place where I sell the balloons, I wear the mask again,” the old man confesses. Mr Hamid explains that just like when the smog hit, he still has to work outside the house. Wearing a mask is one way to minimize the effect of smoke inhalation, even though he can’t always use it properly. He feels he has no choice but leave the house, even though he knows that people of his age have a higher level of vulnerability: vulnerable to haze, now vulnerable to COVID-19. “It’s like being in a battle, the enemy invisible. When it was smoke, it was still visible to the eye; but this corona, we can’t even see it!” 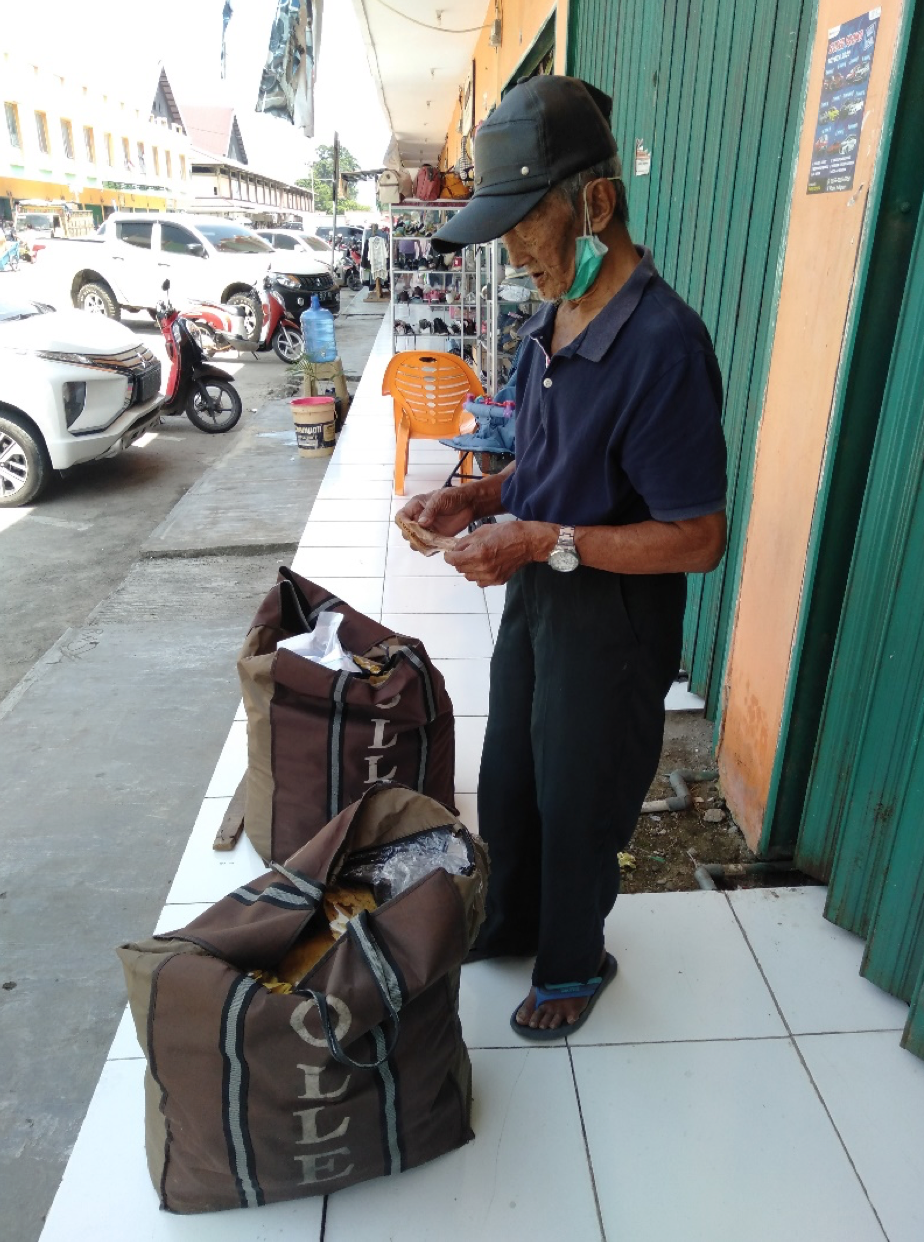 Similar arguments are used by another elderly man who works selling snacks around the clock. Every day he has to push his sales cart up to a dozen kilometres. He seems not to care about the pandemic that was happening. The mask he is carrying he has stuffed into his trouser pocket. He admits that he only brings one in case there is a mask raid by the city government at any time. Since the haze era, he has never been able to stand wearing a mask. The hot air and his advanced age, he says, made him feel short of breath when wearing a mask. The invisibility of Covid19 makes it seem unreal and contributes to his indifference: “Later it won’t be corona that kills you, but shortness of breath”, according to this old man.

Both haze and the COVID-19 virus are having a clear impact on the elderly of Jambi. The limitations to doing activities outside the home and the threat of health problems make the lives of elderly Indonesians in both situations become increasingly constrained. And of course it also has an impact on social and economic life. Imagine if somehow both came together?! For the time being, this dual threat seems averted. Rain has started to fall again in the city of Jambi, and the dry season is thought to be over. There are good reasons to hope that at least the pandemic will not be exacerbated by the haze.

Note: The photos were taken by Tengku Syawila Fithry, with permission by the people photographed.